Update from Tim and Fred’s Trip to Haiti

In our last update, we heard from Fred as he and Tim arrived in Haiti. In his second update, we hear about the progress being made with the school’s principal and staff.

“On Thursday, the gang piled into the truck about 9:00am so as to arrive at Villard (L’Artibonite region) about 10:00. After we arrived, Sabastien [driver and interpreter] made introductions all around. The principle, 5 of the school’s 7 teachers, the contractor who did the foundation and a parent of one of the students were present. We headed into the church for our first sitdown, Jack recording the event after asking permission. The usual pleasantries were exchanged as were some heartfelt thoughts about the project from both sides. We asked a lot of questions about how the school was currently run, the town, all the things our group had discussed the night before. Tim and I took turns asking and replying as the interaction moved forward. After a while we brought out the school renderings and Tim explained the plans through Sabastien’s interpretation. The school representatives were obviously impressed with the plans and the effort that had gone into them and they said so. 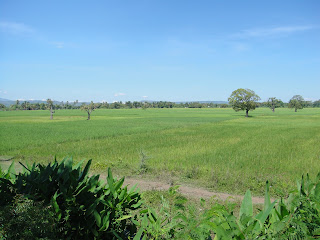 We all returned to the school and talked more about the project. Tim and I wanted to make sure that our vision of the school was what the principle and teachers felt they needed. When we asked everyone present if they had any other questions one teacher simply asked “when”, meaning when will the school be built. This was a really tough question for Tim and I. We knew how important the school was to the community. I tried to explain that we were not some big well funded NGO and that we could not start the building until we knew we had the funds to complete the school. I expressed that Tim, myself and our non-profit sponsors were working as hard as we could to get the word out and raise the needed funds but to put a specific time on completion would not be possible. 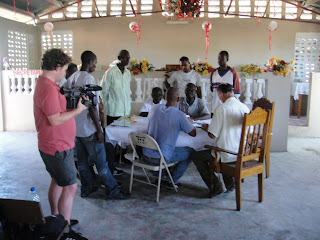 We wrapped things up, said our goodbyes for the day and headed back to our hotel with the promise to meet again the next morning. We were all pretty spent from the experience. It was an emotional event for Tim and I, Sabastien was fatigued from trying to get our meaning across as accurately as possible and Jack was tired from taping and trying to get the sound right. As we headed off we all agreed that the day had been a success but that we now had our work cut out for us.”

In our next post, we’ll get a glimpse into Tim’s thoughts upon leaving Haiti. In the meantime, please help us raise the funds that are so desperately needed so we can begin construction for this amazing community. Visit the Haiti School Project website to make a contribution, and help spread the word by liking us on Facebook and following us on Twitter.

Return to All NewsNext: The Haiti Sc...